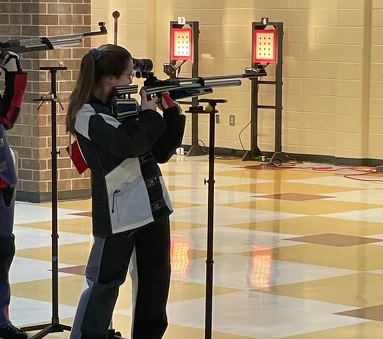 Our Athlete of the Week this week is Sofia Sadir. Sofia has been a part of the air rifle team since her freshman year. She says, “It’s hard to pick just one memory when I’ve had so many great ones over the past four years, but I’d have to say qualifying for state this year for the first time is one of the best.” When asked why she thinks she was chosen, Sofia said, “My focus and drive at practice could be why, or even just my contribution with spending time during the week and teaching our new shooters what I have learned.” Head Coach Jennifer Flanagan says, “Sofia assists in training the freshman and has demonstrated leadership through action. She has even qualified for state already!” Sofia plans to go to college and study engineering or psychology. Her advice to younger athletes is “To never give up on your sport because hard work will always pay off even if the beginning is rough. The time and effort show in the end.” Congratulations on such special recognition, Sofia!