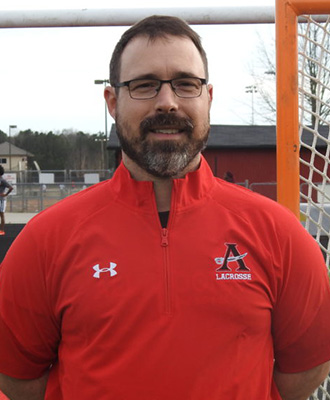 Coach Wishon has a Bachelors in Health and Physical Education from Kennesaw State University and a Masters in Health Science from the University of Alabama, and he has been teaching for fourteen years and coaching for thirteen years.  In high school, he played football.  Coach Wishon has been named the MDJ Coach of the Year two times, and in 2016, he was named the U.S. Lacrosse Coach of the Year for the Georgia Chapter.  He is married to Sarah Wishon, and they have one daughter, Evelyn, age seven, and one son, Mosley, age two.

Coach Wishon looks up to John Hunter and finds inspiration from Michael Jordan, who said:  “Some people want it to happen, some wish it would happen, others make it happen.”