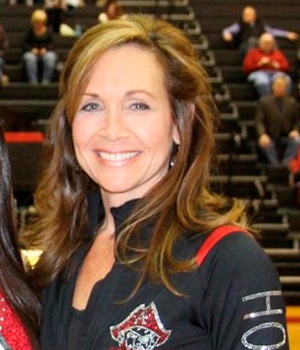 Coach Mattingly is a native of Toccoa, Georgia. In high school, she was a featured twirler, where she twirled fire at football games, and a dancer. Coach Mattingly went on to attend the University of Georgia where she was the only freshman to be selected to be on the UGA Majorettes. She went on to be the Captain of the UGA Dance Dawgs and Majorettes her sophomore through senior years. She was the choreographer for both teams and led them to winning the National-World Collegiate Half-Time Championship held at Notre Dame University. She earned a B.S.Ed from UGA and also has a M.Ed. in Health and Wellness Education.

Coach Mattingly is a former dance studio owner and award winning dance instructor and choreographer. After retiring from the dance studio, she became the PE teacher at Ford Elementary here in the Cobb County School District. She is the current teacher of the year at her school, as well as the Cobb County PE teacher of the year. She created the Hotshotz Dance Team in 2011. They have won state titles in hip hop and high kick. She remains an active judge for the UGA Dance Dawg auditions.

Coach Mattingly is married to Ed Mattingly, and they have three sons, two of whom have graduated from Allatoona High School: Hagen is 25 and works with film projects in Atlanta; Clay is 23 and is a recent graduate from Kennesaw State University majoring in Finance, and Eli is a senior at Allatoona High School, throws the discus and shotput for the track team, is one of the anchors for the news team, and loves working with the video program.