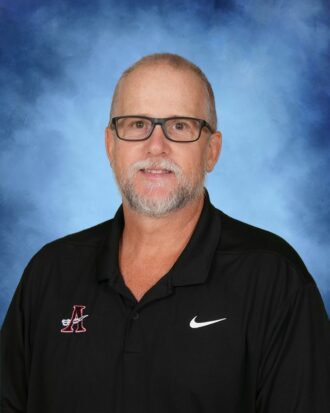 Coach Joe Lanier has been with Allatoona since the school opened, and he served as the Head Wrestling Coach the first eight years. His program finished in the top five in the state for four of those eight years winning region and county multiple times with one state runner-up and two 3rd place finishes. Coach Lanier was named the MDJ Coach of the Year for Wrestling in 2014 and 2016, the Cobb County Coaches Association Coach of the Year in 2014, and the AAAAA Team Traditional Runner-Up in 2014. Coach Lanier became the Head Men’s Golf Coach in 2019.

He earned his Bachelor of Science degree in Communications from Kennesaw State University and his Specialist in Education degree from the University of Georgia. He also holds a Master’s Degree in Sports Science. Coach Lanier is a 50-year resident of Acworth graduating from North Cobb High School where he met his wife Leigh Ann met and competed in both wrestling and football. Coach Lanier has been married to Mrs. Lanier for 33 years, and they have two children, Zack (27) and Brittney (24), that both graduated from Allatoona High School and Kennesaw State University. Coach Lanier taught English for 17 years and has been teaching Construction and Woodworking for the past several years here at Allatoona.

Coach Lanier finds inspiration from Walt Disney who said, “Whatever you do, do it well.”