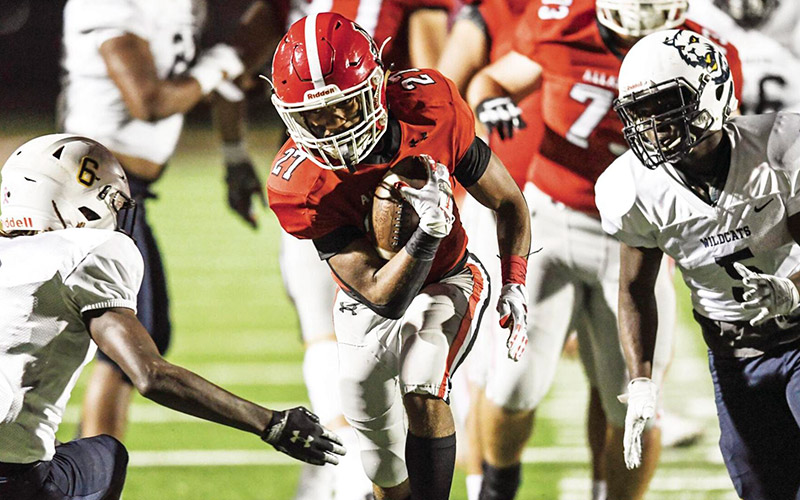 The winner of this Region 6AAAAAA matchup will take a big step forward toward securing a first round playoff game at home.

“We haven’t hyped it up too much, but they know the importance of it,” Sprayberry coach Brett Vavra said. “They understand what it is going to take to be successful and win. We’ve been making that an emphasis at practice this week. The kids are handling it well and are taking preparation very seniorusly. Hopefully, it will pay off on Friday night.”

Regardless of who wins, the remaining three games of the regular season will have its challenges for both teams.

Allatoona will be home against Kell before ending its regular season on the road at Lassiter and Pope.

Sprayberry was supposed to host Pope next week, but that game was cancelled becasue of the Greyhounds current COVID-19 situation. If the Yellow Jackets can not pick up another game, it will be off before heading to Kell and South Cobb.

Kell and Pope also have a shot at winning the 6AAAAAA crown.

One of the more intriguing matchups between the two 6AAAAAA’s undefeated teams will be how well Sprayberry’s high-octane offense can perform against Allatoona’s stubborn defense.

Allatoona has given up just 23 points in five games, and 17 of them came in its season-opening win over Harrison. The Buccaneers are also coming off three straight shutouts over South Cobb, Osborne and Wheeler.

In their game against Wheeler two weeks ago, the Buccaneers held the Wildcats to just 32 yards en route to a 23-0 victory while forcing four turnovers. They also have seven interceptions on the season and six fumble recoveries. Vavra talked about the talents of defensive lineman James Watts (seven tackles, one sack) and outside linebacker Vinnie Canosa (23 tackles, two sacks).

Sprayberry, which averaged 53 points in its last four wins against Wheeler, Kennesaw Mountain, Osborne and Lassiter, is expected to give Allatoona’s defense its biggest test of the season.

“We’re going to find out how we really are defensively this week,” Allatoona coach Gary Varner said. “One thing that helps us is that we have experience in the secondary. We have guys that can play safety and linebacker.”

Running back Demarion Owens rushed for more than 1,600 yards and 16 touchdowns last season and is on pace to put up similar numbers.

He is currently second in the county with 694 yards rushing and 12 touchdowns.

“When (Sprayberry) scores, they score quickly,” Varner said. “Both running backs are good. They have speed and size.”

Allatoona is not without its own offensive weapons. It is led by running back Jayden Ponder, who has run for 457 yards and three touchdowns.

Quarterback Elan Hall has been efficient, completing 50 percent of his passes for 445 yards and six touchdowns against only one interception.