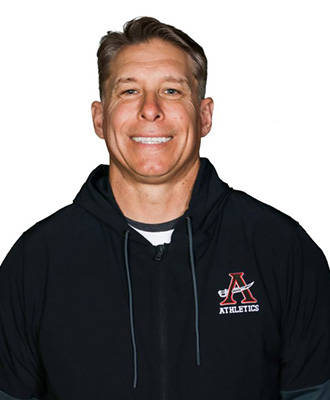 Coach Troy Petersen is a native of Powder Springs, Georgia. He graduated from McEachern High School where he was a four year letterman in both football and soccer. After high school, Coach Petersen attended Tennessee Technological University where he played football and obtained a Bachelor’s degree in Physical Education. In 1995, he moved back to Georgia and began teaching and coaching in Cobb County. He accepted a position as a linebackers coach at South Cobb High School.

After a year coaching at South Cobb, Coach Petersen began teaching and coaching at Wheeler High School. He spent six years at Wheeler where he coached football (linebackers), boys’ soccer, swimming, and cross country. In 2002, Coach Petersen accepted a job to open Kell High School where he coached football, soccer, and strength and conditioning. After four years at Kell High School, Coach Petersen was offered and accepted the head strength and conditioning position as well as linebackers coach at Hillgrove High School until the spring of 2008. He also was the assistant coach for girls’ soccer.

Coach Petersen then decided to take on the task of opening his third new high school. In 2008, he became the Department Chair for the Physical Education Department and was named the Bucs’ Defensive Coordinator. Coach Petersen has enjoyed building traditions and watching the football program grow over the last ten years. Coach Petersen earned a Master’s Degree in Educational Administration from Jacksonville State University and completed his Specialist Degree in Educational Leadership at Lincoln Memorial University. Coach Petersen is married to Laurie Petersen who also teaches at Allatoona. They have two children that keep them busy and entertained, Emma and Owen.