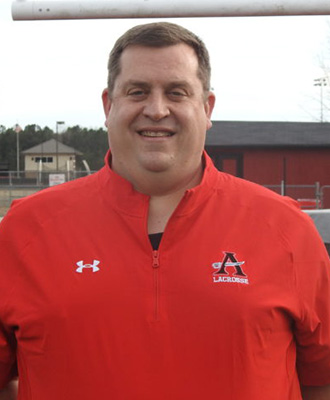 Coach Paul Wilson has a Bachelors of Science in Business Administration from Auburn University 1994) and a Masters from the University of Colorado Graduate School of Banking (2005).  In high school, he played baseball, basketball and cross country, then continued to play intramural basketball and football at Auburn.  He has been coaching since 1991.  Coach Wilson coached basketball summer youth camps in Lenox, Massachusetts from 1991 to 1995; youth basketball at Allatoona from 2010 to 2015; youth lacrosse at Allatoona from 2011 to 2015; and Allatoona Lacrosse from 2016 to the present (2016 and 2017 for junior varsity, and 2018, 2019, and 2020 for varsity).

Coach Wilson is married to Michelle Wilson who taught at Allatoona since the school’s opening in 2008 through May 2019 and continues to work as a teacher for Cobb County Schools.  They have a son, Jerry, and a daughter, Abigail.  Coach Wilson looks up to his father, James Wilson, and he finds inspiration from Bill Belichick, who said: “Mental toughness is doing the right thing for the team when it’s not the best thing for you.”