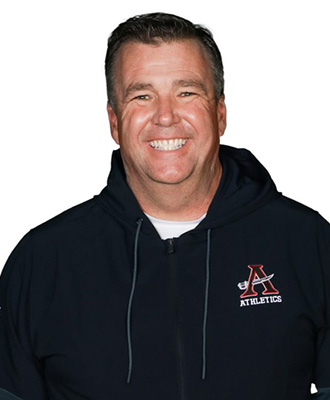 Coach Linch has been a part of the Allatoona Varsity Football program since the beginning as team pastor.  He is honored to work alongside these outstanding coaches and players to help them be their very best on and off the field.  He is also blessed to have his son, Casey, age twenty-one, working alongside him as the assistant team pastor.

Coach Linch is an 1987 graduate of Fayette County High School, Fayetteville, Georgia, where he was inducted into the FCHS Athletic Hall of Fame in 2009.  He played Division I Baseball at Liberty University in Virginia and lettered for three years for New York Yankees great, Bobby Richardson, while he obtained a communications degree in 1991.  Coach Linch is currently the Senior Pastor of NorthStar Church in Acworth, Georgia, and has been there since the church began in 1997.  He is a frequent speaker for college and NFL teams (including the Atlanta Falcons).  During the spring, Coach Linch is the Varsity Pitching Coach for the Allatoona Buccaneers Baseball team.  Coach Linch is married to Anne Linch, and they have two children:  Casey, age twenty-one, and Mary-Michal, age eighteen.