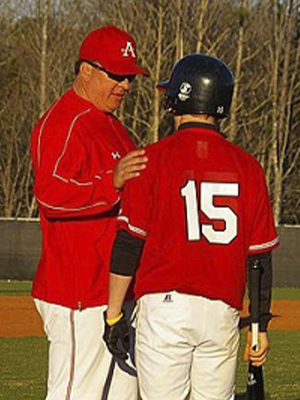 Coach Hansen is starting his thirteenth year at the helm for the Buccaneers and his nineteenth overall as a Head Coach. Coach Hansen was inducted into the Georgia Dugout Club Baseball Coaches Hall of Fame in 2020. In the first twelve years of the program, the Buccaneers are 269-97, with two Elite Eight appearances (2011 and 2012), one Final Four appearance 2015, six Region Championships, forty players signed with colleges, and five players drafted by Major League Baseball. In the past few years, the Buccaneers have been ranked nationally and were invited to the prestigious USA Baseball National High School Invitational in 2016 and 2021. Coach Hansen’s overall record is 383-147 and has been Region Coach of Year in 2011, 2014, 2015, 2016, 2017, 2018 as well as Marietta Umpire Association Coach of the Year in 2016 and Marietta Daily Journal Baseball Coach of the Year in 2018.

Coach Hansen started his head coaching career at Alexander High School in Douglasville, Georgia. In six years at the helm of the Cougars, the team won 114 games and lost only 50. They made the state playoffs three times, region runner-up once, and sub-region champs three times. Over the course of those six years, thirty players signed to play in college and one player, Torre Langley, was drafted in the third round by the Florida Marlins. Prior to Alexander, Coach Hansen was an assistant at North Cobb High School for four years under Hall of Fame coach, Harvey Cochran. Coach Hansen graduated from North Cobb High School where he played basketball and baseball. Coach Hansen and Coach Strickland played together at NCHS. After high school, Coach Hansen played for legendary coach Phil Williamson at LaGrange College from 1989 – 1992, he won the coaches award in 1989 and 1992. Coach Hansen has coached with the Cobb County All-Star Team, Georgia Dugout Club All-Star Team, Team Georgia and USA Baseball. Additionally, he served as the Georgia Dugout Club President in 2011 and currently serves as assistant to the executive director.

Coach Hansen is married to Kelli Laser of Snellville, and their first child, Isabella, was born in March 2015. They also are proud dog owners and have two Great Pyrenees, Tank and Charity. Coach Hansen is the younger brother of Kennesaw Mountain Head Coach, George Hansen and attributes his success to his mother and father, George and Anita Hansen and mentor, Harvey Cochran and former assistant coach Ed Wood.