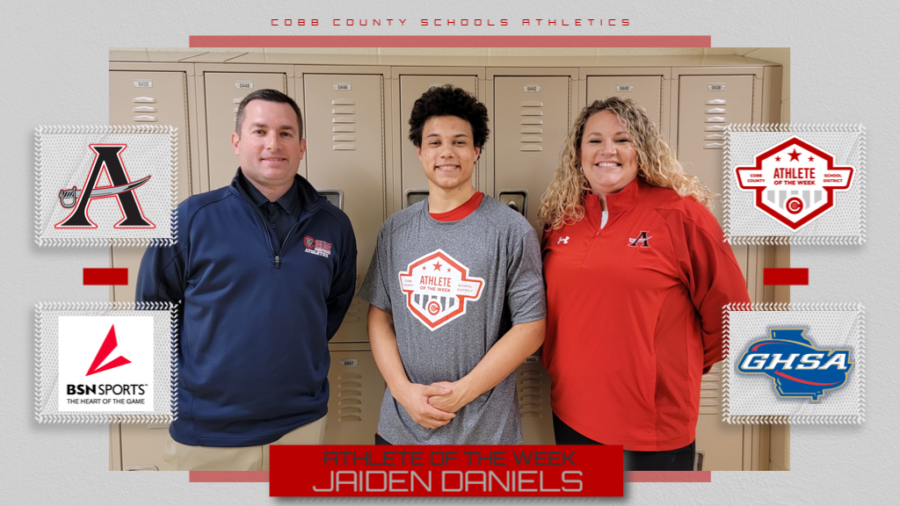 On December 9th, a very talented student at Allatoona won the Cobb County Athlete of the Week award. This student is Jaiden Daniels (grade 12), and he was chosen because he went undefeated at the Creekview Invitational for wrestling. Jaiden recalls the event and claims, “I beat the first seated wrestler in the last 20 seconds of the third period with a reversal that scored me two points and put me ahead.” This is an amazing victory for Jaiden and an honor for Allatoona to be the school of such a gifted athlete. Jaiden started wrestling in the fifth grade, and since then he has learned a lot of valuable lessons. He states, “One lesson I have learned is that nothing is truly over ‘til it’s actually over. There have been many times where matches were decided in the last five seconds. Another lesson is you can’t size up an opponent based on their looks. There were many times when I was against someone that was taller and bigger than me, but when we wrestled, they had no technique and were easily beatable.” These could be applied to real life circumstances too; you shouldn’t give up on something until it’s completely over and you shouldn’t judge a person’s abilities by their appearance. Because of this knowledge, Jaiden was able to secure his place in the invitational and earn the rightful title as Athlete of the Week. This title goes across the whole district, meaning Jaiden was selected from hundreds of athletes. Jaiden said he “felt honored that those at Cobb County recognized my hard work and dedication” when he received news of him obtaining the award. Jaiden has come a long way since he started wrestling five years ago. With dedication and practice, he has gotten to the position that he holds today. His continued commitment and improvement in wrestling is due to how he values wrestling and the practice that it takes. Jaiden states, “I like wrestling because unlike other sports I used to play it was more solo-oriented, so I had more opportunities to prove myself and test my abilities.” Jaiden has proven himself in the world of high school wrestling, and Allatoona will be forever honored that they were able to house such a wonderful student and athlete.