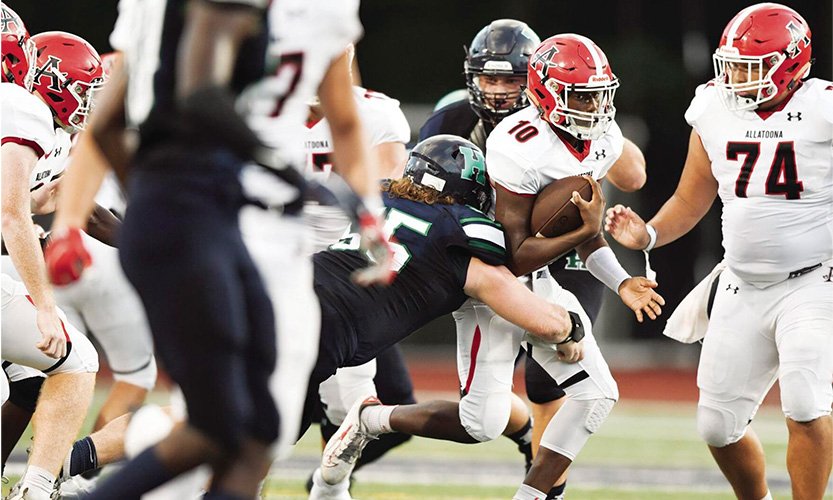 Allatoona returns to the field in a matchup against Denmark at Cobb EMC/Buccaneer Stadium on Friday.

It marks the final non-region opponent this season for the Buccaneers, who toppled Harrison 27-17 last week to begin the 2020 campaign. Last week’s victory marked Allatoona’s first season-opening win since 2014, and it was just the second victory for the Buccaneers over the Hoyas in six tries.

“(Harrison’s) been a thorn in our side the past couple of years, so it was good to come out on top in that one,” Allatoona coach Gary Varner said. “It was also just exciting to get out there and play some football. Nobody’s had any scrimmages or anything because of the pandemic, so it was just great to finally play a game.

“Both teams were pretty sloppy early on, but things got better as the game went on. We were down 10-0, but we kept working and eventually scored and took the lead. Defense played well the whole game. We gave up a special teams touchdown, but I thought overall it was a good showing for our guys. It was good to play, but it was a different atmosphere not having as many fans in the stands as we’re used to. It’s a much different feeling than a normal Friday night, but everybody understands what’s happening.”

The fan atmosphere will be similar tonight for Allatoona, which is expected to have the 30% attendance cap in effect against Denmark. The Danes dropped a 20-0 decision versus Greater Atlanta Christian in their season-opener last week. In its third-year as a varsity program, Denmark went 6-4 last season and just missed making the playoffs.

“They’re a relatively new school with some solid skill kids,” Varner said. “I know they’re very athletic and their defense plays well. They’ll be a good test for us. They’re another (Class AAAAAA) school and their coach obviously hasn’t been there that long, but he’s getting them going and got them to the playoffs last year.

“They have a big quarterback (in Aaron McLaughlin). I think he’s 6-5 and is committed to (North Carolina State). He has a slight shoulder, I think, but they have a move-in from Illinois who came in last week and he’s supposed to be pretty good, too. We’ll have our hands full, for sure.”