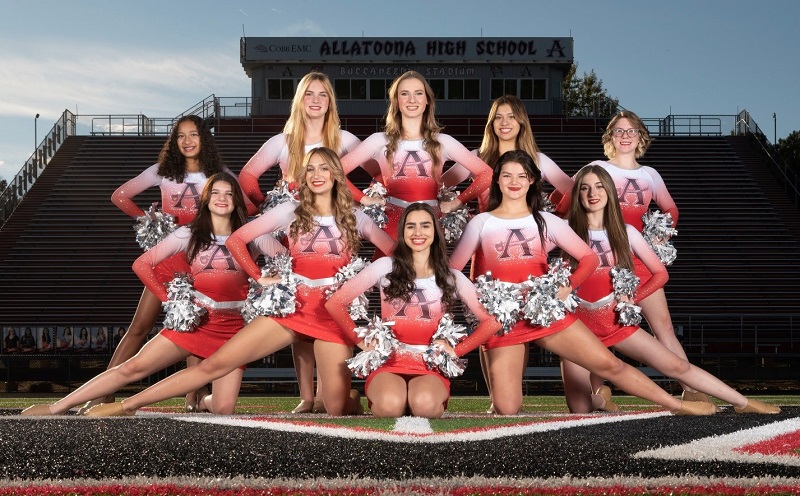 The Hotshotz are the dance team at Allatoona, with their coach Kelly Mattingly, who also happens to be my wonderful mother, and the assistant coach Brittney Mallard. The Hotshotz often go unrecognized at Allatoona, as they are seen as just the dancers that sometimes perform at certain sporting events to many. But, in reality, they are one of the hardest working and most dedicated teams at Allatoona, with a strong sense of community. This article aims to shed light on this underappreciated part of Allatoona’s athletics.

Auditions for the Hotshotz occur in April, and whoever is chosen gets on the team the following year. The auditions consist of two choreography days, then the third day, the students show what they have learned. Coach Mattingly then makes the difficult decision of who to cut and who to keep or add to the team’s roster. Coach Mattingly, on top of being a P.E. teacher, spends hours of her time choreographing the dance routines. Being a Dance Dawg at the University of Georgia, and being engrossed with dance from a young age, Coach Mattingly has choreographed dances for most of her life. To choreograph for the Hotshotz, Coach Mattingly finds popular songs that the team likes, edits them, and comes up with a dance that will fit both the music and the skill of the dancers. Once practice begins, she meets with the Hotshotz at the base of the grand staircase and begin to hammer down on the specifics of each dance routine. All this practice leads up to the routine being performed at either a football or basketball game for the audience. As a person who has witnessed Coach Mattingly’s dedication and hard work on almost a daily basis, I have no issue with saying that she is by far one of the most dedicated and diligent coaches at Allatoona.

All this hard work from both Coach Mattingly and her dancers is not just to perform for the audiences of football or basketball, however. All the hours of practicing and performing are really in preparation for the dance competitions that happen in the winter. In the winter portion of the dance season, dances become drastically more difficult and complex. Coach Mattingly pushes her dancers as much as she can, hammering down and perfecting as much of each routine as possible. All this hard work is not for nothing. The Hotshotz have won several regional competitions. But their biggest triumph was when they won State in both hip hop and high kick routines in 2021.

The competitions the Hotshotz compete and often dominate in are not the only thing that makes being a part of the team rewarding. When asked what part of coaching is the most fulfilling, Coach Mattingly said, “My favorite thing to see as the team progresses is the growth that occurs in each dancer from tryouts to State competition in February.” Coach Mattingly goes on to say that increased skill level, maturity, friendships, team pride, and confidence are just a few things the dancers gain by being part of the Hotshotz. She is immeasurably proud of how far her team has gone to achieve their goals. So, to those interested in trying out for the Hotshotz when the time comes around, if you think it could be for you, or you already have experience dancing, do not miss out on a rewarding opportunity to represent your school.