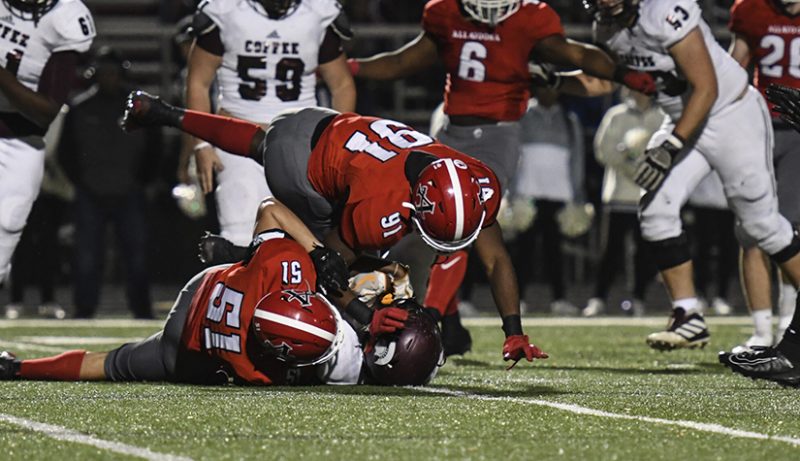 ACWORTH — Allatoona is back in the state semifinals for the first time since its championship season of 2015, earning its spot in convincing fashion with a 24-0 win over Coffee on Friday.

The Buccaneers (10-2-1) needed only one pass completion in the effort — a 38-yard touchdown from Dante Marshall to Asante Das for the first score of the night.

Allatoona’s defense was the star of the show, allowing only one first down in the first half and setting the tone for the shutout. It was the first time Coffee (9-4) had been shut out in almost 11 years to the day, since a 38-0 loss to Peachtree Ridge in the 2008 playoffs — a span of 128 games.

The Trojans had scored 119 points over their first two playoff games.

“I’m just so proud of these kids,” Allatoona coach Gary Varner said. “The defense played-lights out from start to finish. We played physical and had a great game plan.”

Allatoona’s defensive line and linebackers were virtually flawless, allowing a total of minus-2 rushing yards in the game. Coffee was forced to punt 10 times, and went three-and-out on eight of those possessions.

After Marshall’s touchdown pass, the Allatoona rushing attack took over to run away with the game.

Marcus Taylor found the end zone on an 18-yard run midway through the second quarter, putting Allatoona ahead 14-0, where the score stood at the break.

Taylor finished with 84 yards on 11 carries, followed closely by Alex Wilson, who picked up 81 yards on 14 carries.

Kicker Jude Kelley added a 42-yard field goal early in the third quarter for a 17-0 lead, and tailback Dequori Garrett capped off the scoring in the fourth quarter with a 4-yard touchdown run.

“I thought we made some mental mistakes on our first few possessions”  Varner said, “but after that, we moved the ball pretty well for the rest of the night.”

Allatoona’s reward for its Class AAAAAA quarterfinal victory will be a long road trip to Richmond Hill next week. The Savannah-area school defeated Valdosta on Friday, and the Buccaneers will make the trip south with a berth in another state championship game on the line.