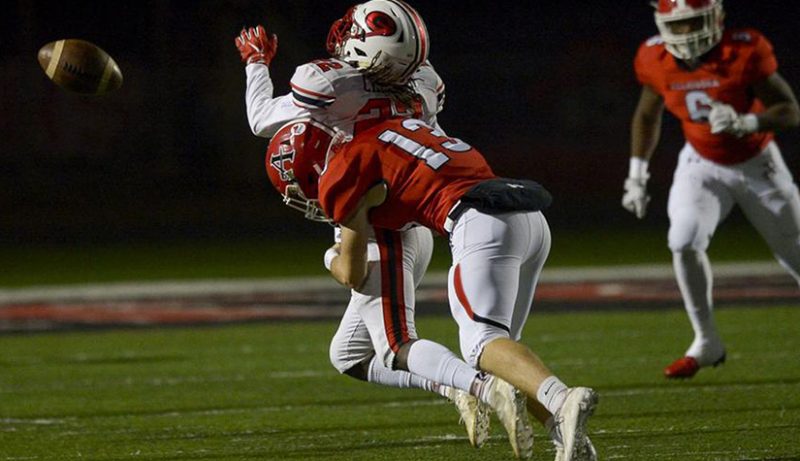 Gainesville had trouble all night against the Allatoona defense, and no one was a bigger problem for the Red Elephants than Brett Blomquist.

The junior defensive back had an interception that set up a touchdown, returned a fumble for a touchdown and scored on an interception return, all in a span of less than three minutes, to lead seventh-ranked Allatoona (8-2-1) to a victory over Gainesville in the first round of the Class AAAAAA playoffs.

The Buccaneers reached the second round for the sixth consecutive season and will play next weekend at Region 4 champion and 10th-ranked Stephenson, which advanced with a 47-20 victory over Bradwell Institute. Gainesville’s season ends at 5-6.

Allatoona had just taken a 14-0 lead on a 3-yard touchdown run by Alex Wilson with 4:16 remaining in the first half when Blomquist took over.

On the first play of Gainesville’s next drive, he intercepted a pass that gave the Buccaneers the ball at the Gainesville 25. Marcus Taylor scored on an 11-yard run four plays later to make it 21-0 with 2:43 left in the half.

Gainesville’s next two possessions lasted two plays each. On the first, Blomquist recovered a fumble after a completed pass and returned it 23 yards for a score. Twenty seconds later, he returned an interception 36 yards to make it 35-0 going into halftime.

“I think it’s great. He’s been getting better every game,” Allatoona coach Gary Varner said. “From the beginning of the year until now, the improvement’s incredible. He just works hard, takes coaching well, and he’s done a great job throughout the year for us.”

Gainesville (5-6) had averaged 44.8 points in its previous four games but never could get anything going against the Buccaneers. The Red Elephants finished the first half with one first down, one yard rushing and 20 total offensive yards. That’s considerably less than the 63 yards Blomquist had on his three returns, not to mention the 163 yards put up by the Allatoona offense.

“We knew they were a running team, so stuffing the run and making them throw the ball, that’s what gets us going,” Blomquist said. “Our secondary’s good, but our defensive line’s even better. Without getting pressure, that’s not happening.”

Allatoona opened the second half with a nine-play, 96-yard drive that ended with Dante Marshall’s 42-yard touchdown pass to Asante Das with 7:24 to play in the third quarter. That made it 42-0, and most of the Buccaneers’ starters took the rest of the night off.

Gainesville managed just 72 total yards. Quarterback Gionni Williams had 28 of his team’s 33 rushing yards and was 7-of-15 passing but for just 39 yards with the two interceptions.

Williams also scored the Red Elephants’ touchdown on a 16-yard run with 3:27 remaining in the third quarter. That possession was the only time in the game that Gainesville had the ball in Allatoona territory.

“We were definitely worried. They have a lot of talent, a lot of skill on that team,” Varner said. “In the playoffs, sometimes you get a little bit lucky. Things go well early, and it kinda snowballs. I think that’s what happened for us