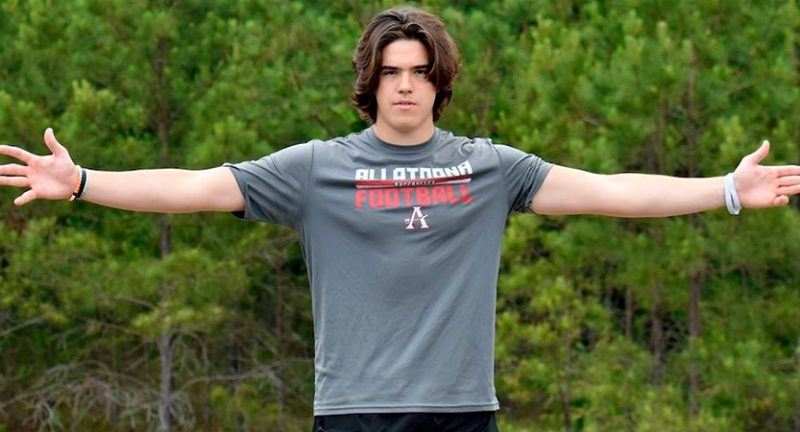 A little over two weeks later, Christian has eliminated the Nittany Lions. Following a trip to Ohio State this weekend, and with a trip to Knoxville scheduled for next weekend, Christian is focused on the Buckeyes and Vols, respectively, he told 247Sports’ Bill Kurelic on Saturday.

The NCAA dead period prevented Christian from meeting with Ohio State coaches this weekend. Christian and his father, Bill, arrived in Columbus on Friday afternoon, and wrapped up the trip Saturday afternoon, the younger Christian told Kurelic of Bucknuts. They’ll have a similar plan on Rocky Top this upcoming weekend.

Following the conclusion of his visit to Tennessee, Christian will announce his commitment on his birthday, Sept. 1.

247Sports currently has Christian ranked as a three-star and the 18th-best tight end in the class of 2022. The 6-foot-5, 225-pound tight end from Allatoona High School in Acworth, Georgia is considered the 26th-best player in the Peach State.

Christian’s father played for the Vols during the Johnny Majors era, and his mother is a former two-time All-American Tennessee cheerleader. Nearly all of Christian’s family currently lives in Knoxville — 25 minutes away from campus to be exact — and he grew up attending UT games.

“I can really see myself being in that offense,” Christian explained to Rocky Top Insider last month. “Coach (Jim) Chaney runs a really good ship up there being the offensive coordinator. Coach (Joe) Osovet is an awesome guy as well. All together, that makes Tennessee appealing.”

His interest in Tennessee stems from the relationships he’s built with the coaching staff. And the fact that he grew up a fan of the program.

“I love talking to all the coaches up there,” Christian said. “They’re so awesome. The second thing, I grew up a Tennessee fan. It’s in my blood.

“There’s nothing like it. Walking in, it’s (Neyland Stadium) a huge stadium, the orange and white on the Tennessee river. It feels really good. Even before I was getting recruited by Tennessee, I walked in there like, ‘Man, this is awesome. This is somewhere I would want to play one day.’ And now that I have the opportunity, it’s so surreal, and it’s such a blessing.”

“It’s smooth,” Christian said. “We talk every week. We’ll call each other and it’ll be good. We get along really well. He’s a really good guy. He’s from New York. I’m from Georgia. We mingle on another level.”

As for Ohio State, the appeal of playing for the Buckeyes is what stands out the most to the former three-sport athlete. Christian also played lacrosse and basketball growing up until his football recruitment blew up following a breakout sophomore season.

“Even before I got recruited, these were my top three schools,” Christian concluded. “The main thing about Ohio Sate is that they’re so good. I like watching Ohio State football, and the fans are awesome, huge stadium, and that all together has been really appealing.”